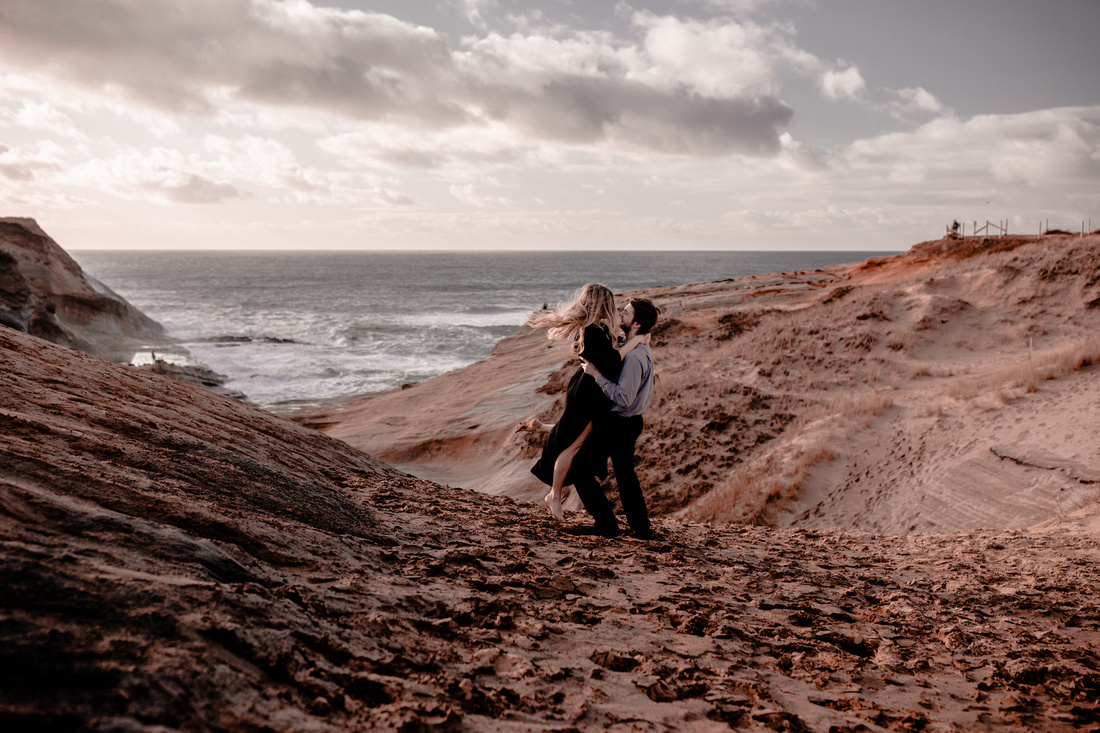 Kiley and Jacob chose Cape Kiwanda Beach in Pacific City, Oregon for their adventurous engagement session. We had originally planned their session at Hug Point, but the forecast was predicting rain at the same time as their session. I kept watch on the weather all week and suggested moving the session to Cape Kiwanda since it wasn’t supposed to rain there until later.

Kiley said they love the beach and spend as much time there as possible when they have time off together. The breathtaking sand dunes of Cape Kiwanda beach are one of Oregon Coast’s most stunning features. You can also see the iconic Haystack Rock in the background of their photos. Cape Kiwanda is one of absolute favorite places and I love photographing sessions there. Great Dune is a huge hill of mudstone and sandstone and was the perfect backdrop for Kiley and Jacob’s photos. 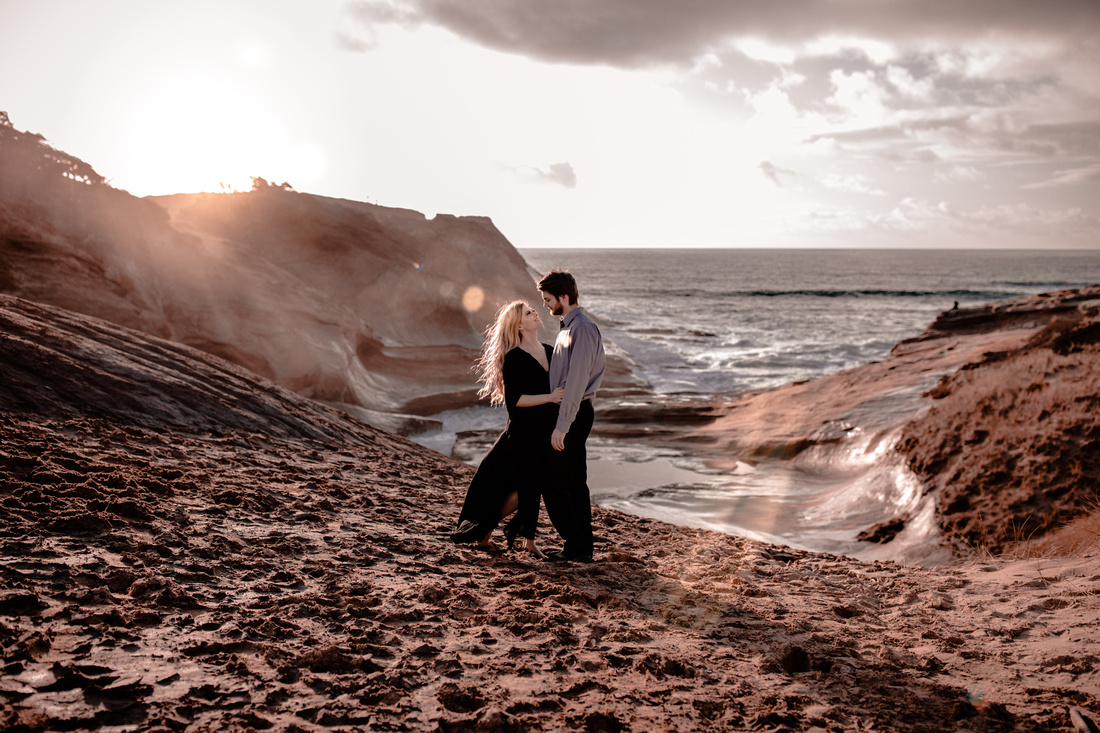 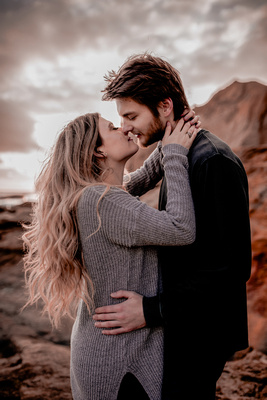 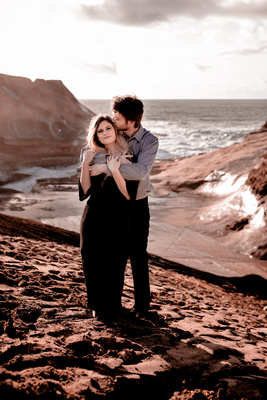 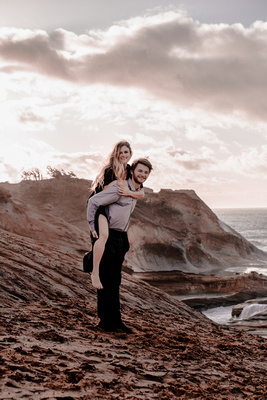 These two lovebirds have been together for 2.5 years. They met at a country music festival, but didn’t start dating until they matched shortly after on Tinder. Their first date was the drive-in move theater. Kiley told Jacob to surprise her with snacks for the movie, but his snacks were so awful she should have ran. They are both very glad she didn’t. 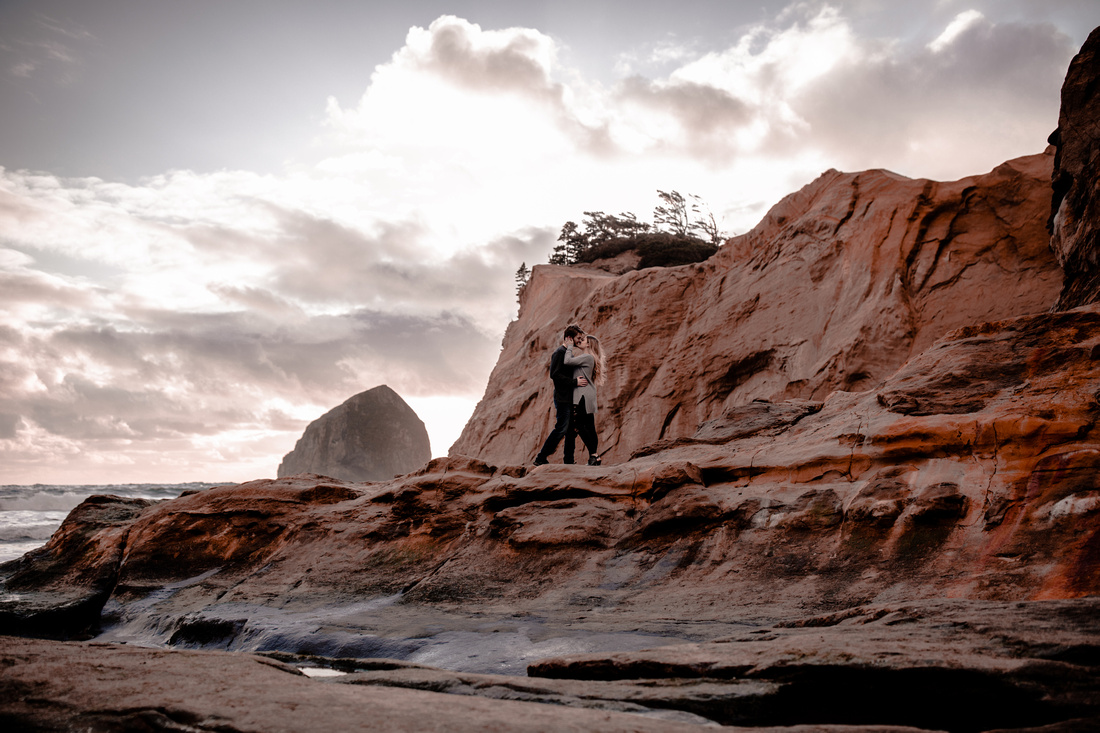 Jacob proposed to Kiley at a Portland Oregon Trail Blazer’s game. His dad is the stunt team coach for the blazers and sometimes gives the couple tickets. Kiley knew something was definitely up because everyone was acting so strangely! So she asked Jacob, “You’re not proposing to me tonight, are you?” Jacob said no, but his smile told otherwise. After the parade, Kiley took a silly photo of Jacob and his dad holding her sideways with the stunt team, because she always jokes that she wants to be on the stunt team. Once they set her down, Jacob’s dad hands him the ring and Jacob gets down on one knee. Everyone yells, “Say yes!” Excitedly they hug! When Kiley comes down from cloud 9, she’s pleasantly surprised to realize her little brother joined in making it a group hug celebration!  Kiley & Jacob’s families join together to continue the celebration thanks to Grandma’s game tickets!  The proposal turned out exactly how Kiley dreamed it would be, surrounded by their families! 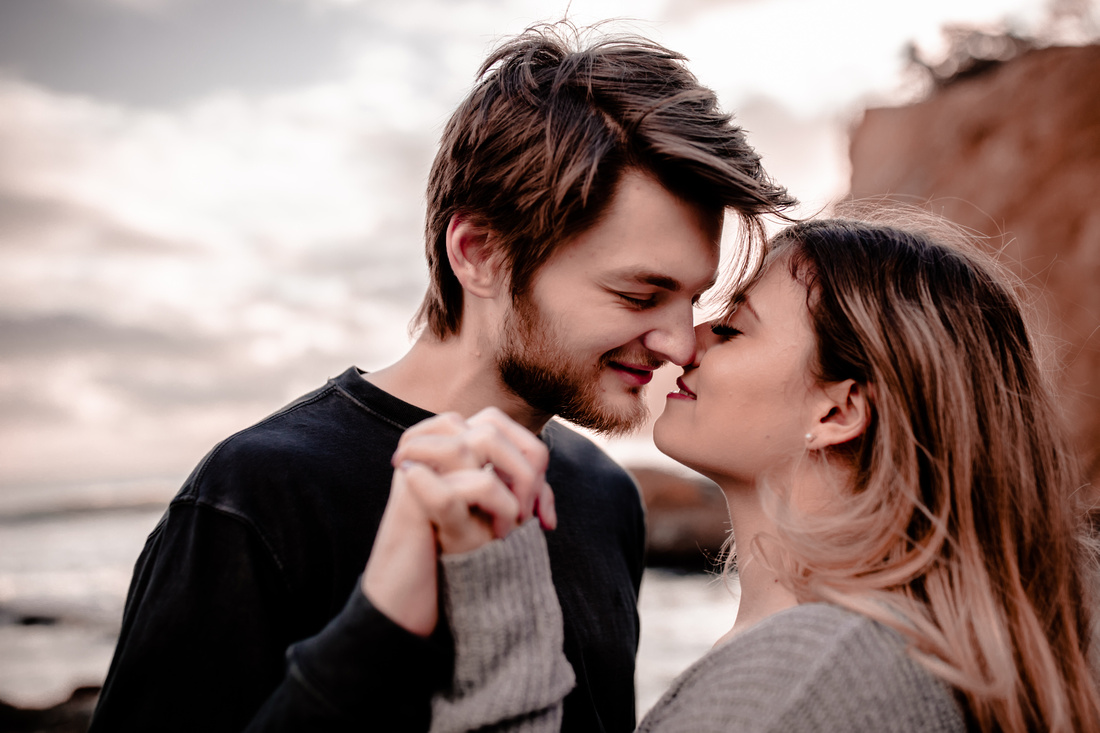 Kiley said the most memorable part of their engagement session was how much they laughed during it. She said they laughed every time they put their heads together because they looked so funny to each other. This was my favorite part too, because their fun, outgoing personalities could shine! All of the laughter and genuine smiles were phenomenal and showed how much they are so madly in love! 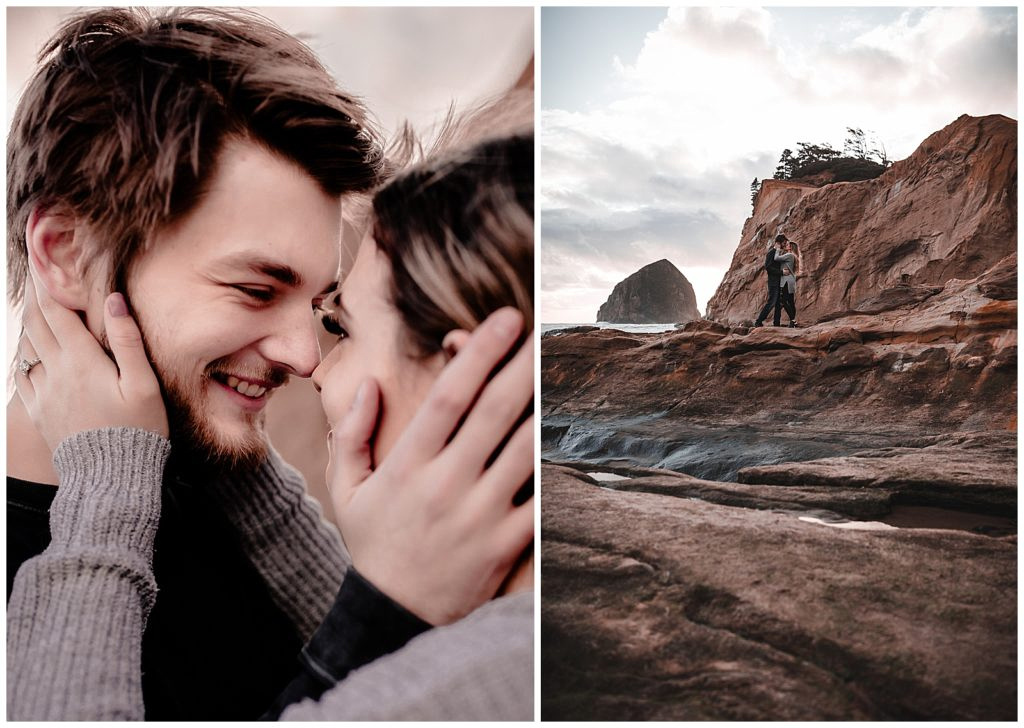 Pro Tip from Kiley: Remember to bring your lipstick in case in fades and just relax and go with it! Kiley and Jacob absolutely loved their photos and said I was able to make them feel comfortable and offered helpful advise. This is everything I hope for with my sessions and I am so glad they felt comfortable enough to really be themselves.

I am so glad the rain held off for their session and that there were flexible to changing locations. Sometimes things work exactly the way they were meant to and we were able to capture these phenomenal photos! 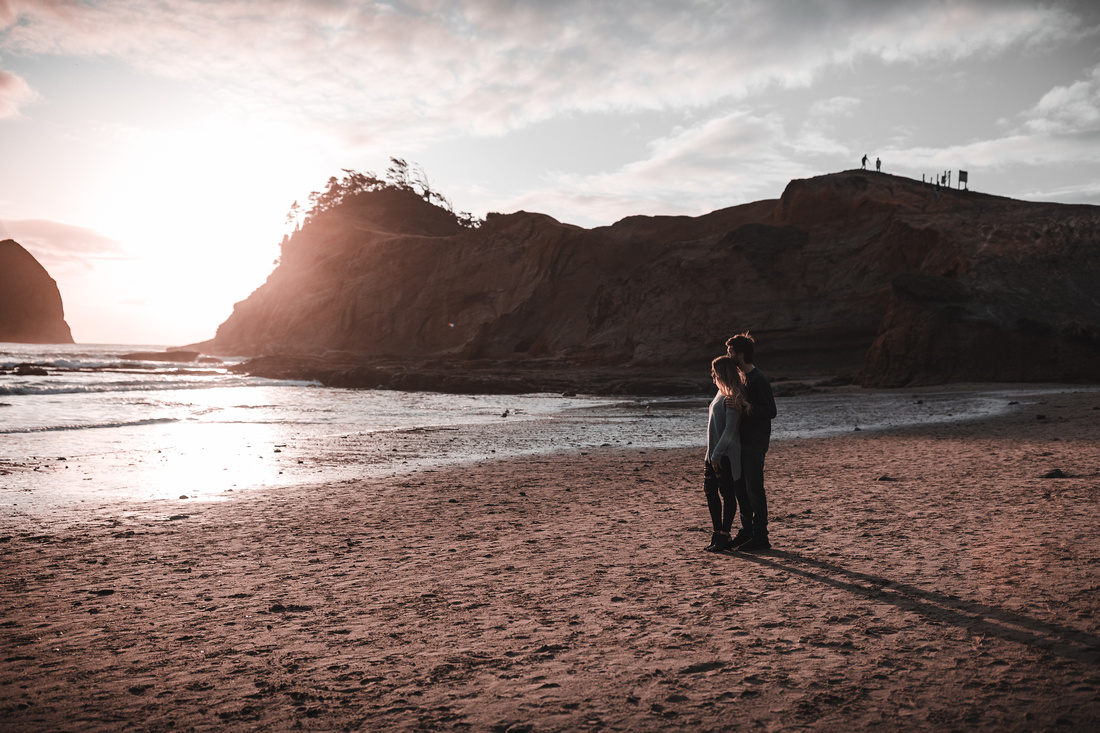 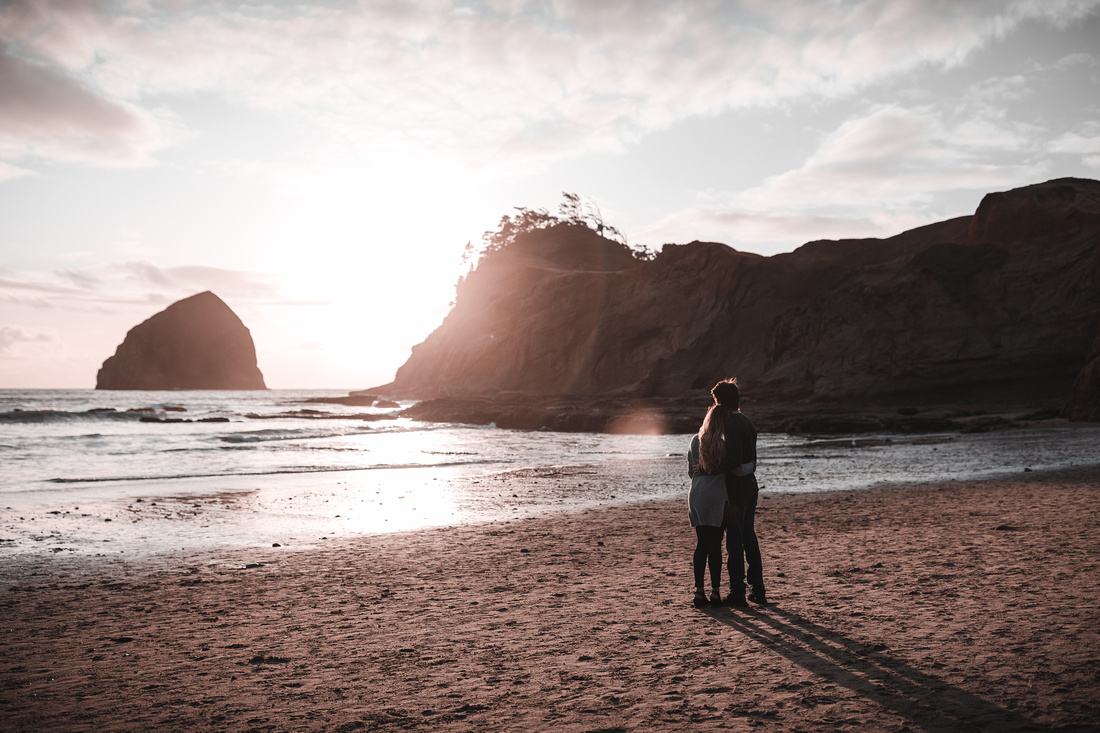